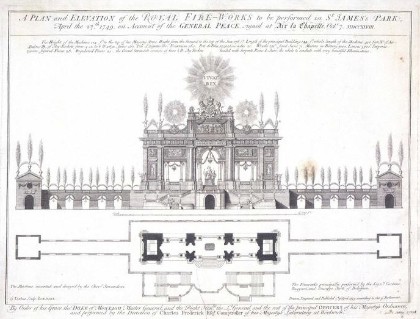 “The peace treaty of Aix-la-Chapelle was signed in 1748, ending the War of Austrian Succession. On 27 April 1749 a firework spectacular took place in St James’s Park, London, to celebrate the Peace of Aix-la-Chapelle. This print shows the large wooden pavilion by Giovanni Nicolò Servandoni, painted to resemble stone, that was erected to launch the fireworks. The pavilion was 410 feet long and 114 feet high.
The firework display was not an unqualified success: it rained on the day; the pavilion housing the fireworks caught fire and burned to the ground; and there was a public fight when the pavilion’s architect, the Chevalier Servandoni, drew his sword and confronted the organiser of the event, the Duke of Montagu.
The famous composer Georg Friedrich Händel wrote several pieces to celebrate the signing of the Peace of Aix-la-Chapelle. The most famous of these, the Music for the Royal Fireworks, was performed at the firework spectacular in St James’s Park on 27 April 1749. The piece was a great success and is still one of Händel’s most frequently performed compositions”.